For many years, my father drove east through Frankfort, Ind. on Indiana State Road 28 on his way to Fairmount.  Every time he passed Frankfort High School, he would point out the arena that set back off the highway while trying to imagine what the large structure looked like inside.  It's rounded exterior, yellow brick facade, and large white dome was contrast to the smaller rectangular or barrel roof gymnasiums that he was accustomed to in Missouri.

What my father didn’t know as he drove by Case Arena all those years was that he had seen the interior before.  And what he thought was an innovative marvel didn't compare to the coaching legend and innovator who it's named in honor of.


Never did he imagine while admiring the arena from afar, that years later he would be inside playing basketball.
﻿
﻿In the fall of 2008, we visited Frankfort's Case Arena and as we pulled into the parking lot, I could read what my father was thinking - "I told you it was one-of-a-kind." Built in the early 1960s, the arena is ranked as the 22nd largest high school gymnasium in Indiana with a capacity of 5,509. Known throughout the state for it's architectural design, Case Arena is also home to one of the most unique school mascot names, the Frankfort Hot Dogs. Case Arena could very well pass for a college basketball arena. Well, in a way it did in 1994.  This is one of the reasons we added it to our list of gyms to visit.

Case Arena became the homecourt for the Western University Dolphins in the basketball movie, Blue Chips, starring Nick Nolte, Shaquille O’Neal, and Anfernee 'Penny' Hardaway.  In the movie Nolte plays college coach Pete Bell who is under a lot of pressure to win. To attract the blue chip caliber players, he agrees for boosters to secretly pay recruits in order to return to a winning program.  In the end, he would step down as coach.

The movie also brought many of the finest basketball players and coaches to town, such as Bob Knight, Bob Cousy, and Rick Pitino, since three Western University home games were played in Case Arena.  Although the exterior shots of the arena were filmed at the University of Southern California, all interior shots including the games and locker room scenes where filmed in Frankfort.  A few pieces of movie memorabilia and photos remain in a glass case in the arena’s lobby.  If you're ever lucky enough to go inside the boys basketball locker room, you will find the signatures of a few of the players and coaches from the movie on a wall.  Although faded, the signatures still remain today.


Although the movie filmed inside the arena led us to Frankfort, it's the name on the arena's exterior that we enjoyed learning about the most.


Most people identify Everett N. Case as the successful coach at North Carolina State University (NC State) who would later be considered the “Father of the ACC”, but his coaching roots began in Indiana. 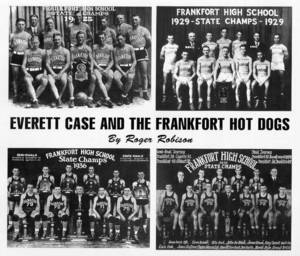 The 1936 State Championship game would have significance because it ended in a double overtime time against Indianapolis Tech.  After the second overtime everyone was tired so the coaches agreed to call it a tie.  This decision impelled Case to request a rule change that no basketball could end in a tie.


After winning the State Title in 1939, Case organized an Indiana All-Star team to compete against his 1939 team.  The All-Star game was taken over by the Indianapolis Star, which would evolve in 1943 into the historical all-star event still played today with Kentucky in which both states would host an All-Star game.


Another of Case’s contributions to the game would happen as a result of one of the most memorable Frankfort games.  In 1926 as Logansport was on the way to play Frankfort, they got stuck in a snowdrift. As a result, the game would start just a little before midnight.  When Logansport, who was one of the best teams in the state that year, took a 7-6 lead, Frankfort would inbound the ball and stall at the far end of the court for the last 11 minutes of the first half.  Logansport stalled in the second half until they were called for a traveling violation. The turnover lead to Frankfort again stalling until 5 minutes left in regulation.  They would then execute a few set plays and go on to win 10-7 but the stalling on the far ends of the court would led to the 10-second rule we have today.


In 1942, Case would leave Frankfort for the United States Navy, where he was commissioned to serve in the physical education development area and assigned to coach among other responsibilities. He would be discharged in 1946 following the end of World War II.  After evaluating his basketball coaching options, which included a return to Frankfort, he chose to sign a long term contract as head coach at NC State.

Over the next 18 years, Case would bring superiority basketball to the southeastern region of the nation.  When first arriving to Raleigh, football ruled the South. Case was largely credited with making basketball an obsession in the state as we see today.

Unfortunately, as Nolte's character Pete Bell would circum to winning at all costs in the movie Blue Chips, Case would also be tied to recruitment and point shaving violations that would result in multiple year probations. Shortly thereafter during the beginning of the 1964-65 season, Case would step down as head coach of NC State due to inoperable cancer. He would name his top assistant, Press Maravich, as his successor.

While coaching at the high school and college levels, Case would be responsible for many innovations and contributions to the game, both on and off the court.  Some of the notions that Case thought of or popularized are as follows:

In 1966 at the age of 65, Everett N. Case would lose his battle with cancer.  He would divide his estate among 220 of his former players.

It is also said that Case asked that his body be laid to rest in Raleigh Memorial Park Cemetery facing North Carolina Highway 70 so when future NC State Wolfpack teams traveled to play Duke and North Carolina, they could wave at him – and he would wave back.

Everett Case will never be forgotten in Frankfort.  The arena that bears his name is almost as large as his list of career accomplishments and contributions to the game.  Hollywood couldn't have wrote a better coaching story.

In the years since touring Frankfort's Case Arena, my father has drove by it numerous times.  Where he once looked over and pointed at the large round arena in wonder, he now points and reminisces about his day of playing basketball inside.

Posted by Heath, Jaryt, and Gary Hunziker at 9:48 PM 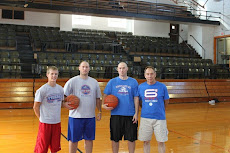 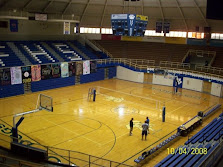 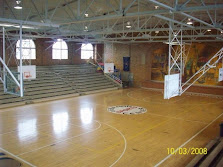 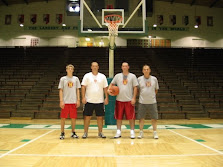 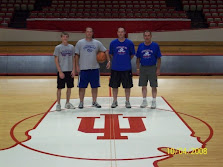 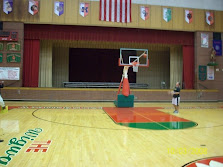 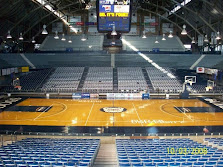 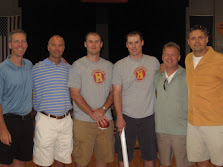